Skip to content
Gen Z participates in their first presidential election and takes over the voting polls.

For a majority of Generation Z, the 2020 election is the first presidential election they are participating in and they have exercised their right to vote more than any generation ever before. When the country elected the 45th president, Donald Trump, four years ago, a lot of the now eligible voters were just high school students not old enough to vote.

But, the young end of the Gen Z was determined to use their right to vote as soon as they got the chance. Now that they have the power to vote, Gen Z-ers have registered to vote, mailed in their ballots, stood in waiting lines, and done everything possible to vote in this election.

Joy Douglas, 19, emphasized voting in her first presidential election was important to her because she wants her voice to be heard in this country.

Douglas said, “I voted because I want my voice to be heard. Representation matters, and I need someone with the same values as me in office.”

Like Douglas, millions of Americans voted by using a mail-in ballot for this year’s election. The spread of COVID-19 has caused a rise in mail-in voting that allows people to vote in the comfort of their home without people around hundreds of people and risk catching the virus.

As of October 29, at least 78 million people have voted in the 2020 general election according to the U.S. Elections Project. Including in-person voting and mail-in ballots, the number of early votes is significantly higher than the 2016 election. Five days before election day, the 2020 election voters so far have made up 57 percent of the total votes counted in the 2016 general election.

Although there is a rise in the number of voters among all generations, the turnout for young voters is the highest it has been in years. In comparison to the 2016 election, the number of absentee and early votes cast by younger voters in key states this year is up in 14 different states. The votes casted among Gen Z and young millennials is breaking records and sweeping the 2016 election out of the park. 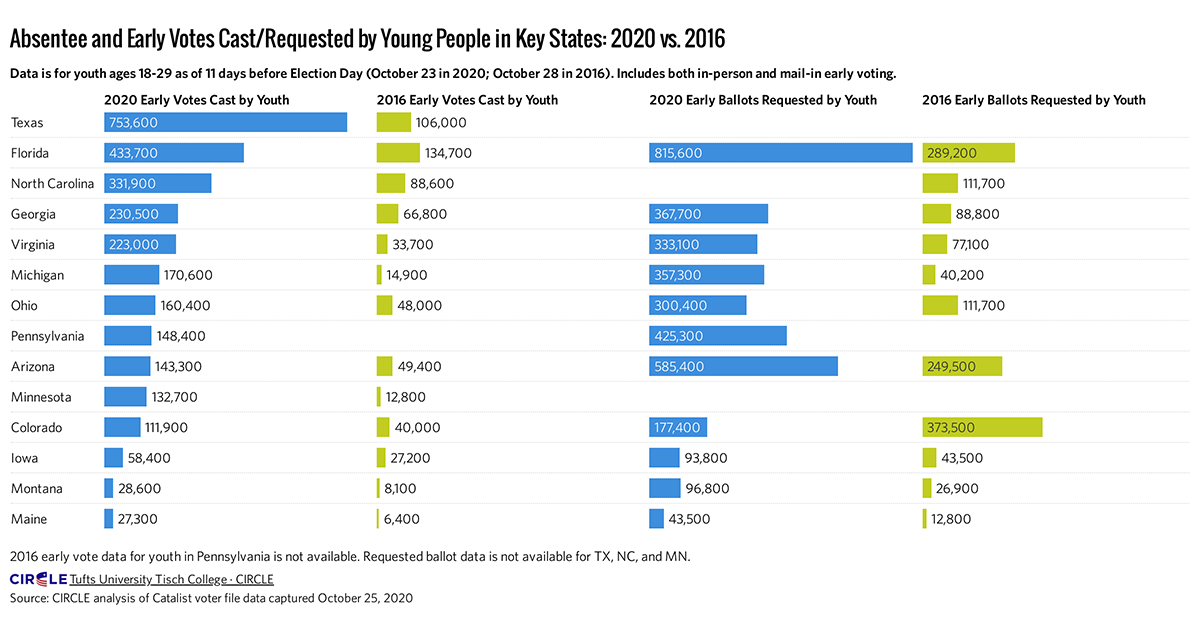 In Texas, the number of early votes casted by the youth is seven times the number of votes casted in 2016. Florida, North Carolina, Georgia, Virginia, and several other states have seen a vast increase in the number of early votes among young voters. Whether the increase of votes is because of the state of the election or a majority of Generation Z being able to vote in their first presidential election, the youth is using their voice in this election like never before.

Yasmin Arias, 20, explained voting early was important to her because she wanted to use her voice to represent those close to her that do not have the opportunity to do the same.

“The reason I voted is because I’m surrounded by many who don’t have the chance to. I’m an ally for many around me. My vote matters to them and to me. Both of my communities are counting on me.”

For many young voters, they are determined to use their voice in this election because they would like their communities to be represented in this country and hope for change.

In the last year, Gen Z has used their voices by creating petitions for important causes, organizing peaceful protests throughout the country, donated money towards organizations that need funding, and countless other acts of service. Their most recent act of bringing change to the country is putting their power into a vote.

Lauren Williams, 20, explained the current state of the country encouraged her to vote as she would like to see a change in the Oval Office.

“I voted because I feel like my vote matters and it’s the least I can do to get that man out of office,” Williams said.

Regardless of what candidate voters decide to elect this year, each vote matters and holds significant value that could impact this country. Millions of people are voting each day as the number of total early votes continue to rise just days before the election. If you are eligible to vote, please exercise your right as a citizen and participate in the 2020 presidential election.